TORONTO, ON (January 19, 2016) – Extendicare today announced its multi-year partnership with top-ranked Canadian PGA TOUR golfer David Hearn, in which Hearn will act as a global ambassador for the company on and off the course. With this sponsorship, Hearn will wear the Extendicare logo on the right sleeve position of his golf apparel. The relationship will also see Hearn and Extendicare work closely together to campaign for a cause and organization they both widely support – the Alzheimer Society of Canada.

“We are very excited to be entering into this partnership with David. His commitment to his sport and to the Alzheimer Society show that he truly believes in helping people live better which is our mission,” said Tim Lukenda, President and CEO of Extendicare. “We look forward to supporting David’s continued success on the TOUR.”

Hearn, the top Canadian golfer on the PGA TOUR during the 2014-2015 season, is known for his consistency and determination for excellence. The 2014-2015 season marks his best to date, with 4-Top 10’s results, finishing 49th on the PGA TOUR Money List, and 55th in FedExCup Points. He also gave Canadians a lot to talk about and be proud of during Canada’s national tournament at the 2015 RBC Canadian Open – holding a two round lead to finish 3rd. Two weeks prior, Hearn finished 2nd after a playoff at the Greenbrier Classic.

In addition to his successful year on-course, the season also marked the official launch of the David Hearn Foundation – the charitable arm of Hearn’s philanthropic initiatives, benefiting the Alzheimer Society of Canada.

In 2012, Extendicare Assist, the management and consulting division of Extendicare, partnered with the Alzheimer Society of Canada for a five-year commitment to support the “culture change” initiative which will improve the quality of care and life for Canadians living with Alzheimer’s disease and other dementias in long-term care homes. Over the past four years of the partnership Extendicare Assist has donated over $375,000 to the Alzheimer Society.

“I am proud to be partnering with Extendicare – representing the company both in the golf space, as well as through our shared commitment to the Alzheimer Society of Canada,” said Hearn. “As an individual who has witnessed the effects of the Alzheimer’s firsthand – knowing that Extendicare has implemented resources into their facilities to improve the quality of care for Canadians living with dementia diseases makes me believe in who they are and what they do.”

“We can bring about tremendous change for Canadians affected by dementia when we work together. We’re extremely pleased with this new partnership and look forward to continued success with David Hearn and Extendicare,” says Mimi Lowi-Young, CEO of the Alzheimer Society of Canada.

Extendicare’s mission is “helping people live better.” We provide a range of care and services across the seniors’ health system. Our team of almost 25,000 staff care for over 100,000 Canadians in their own homes, in long-term care homes and in retirement communities across the country. In 2012, we partnered with the Alzheimer Society of Canada to support the “culture change initiative”. Our shared goal is to improve the quality of care and life for Canadians living with Alzheimer’s disease and other dementias in care homes. We encourage all of our clients and residents to experience extended vitality of the whole self through promoting wellness, support and connectedness – all of which can be found in golf.

ABOUT THE DAVID HEARN FOUNDATION

Founded in 2015, the David Hearn Foundation’s central focus will be to support the Alzheimer Society of Canada in reducing the personal and social impacts of the disease by raising funds to provide individuals and families with needed programs and services. Through its partnership, the Foundation will aim to increase awareness, improve care for those in need and enhance the quality of life for those affected by the disease, while also empowering Canadians to take action and create positive change. The Foundation is an extension of Hearn’s existing charitable efforts with the Alzheimer Society through the annual David Hearn Charity Golf Classic, which has provided charitable contributions to the Alzheimer Society of Brant Haldimand Norfolk Hamilton Halton since 2012.

ABOUT THE ALZHEIMER SOCIETY

The Alzheimer Society is the leading nationwide health charity for people living with Alzheimer's disease and other dementias. Active in communities across Canada, the Society offers help for today through our programs and services, and hope for tomorrow by funding research into the cause, prevention and a cure. To learn more, visit www.alzheimer.ca.

For further information about the David Hearn Foundation or for interviews with David Hearn, please contact:

The recognition underscores the critical role women play in leadership at Extendicare — from running our long-term care homes and home care operations to executive level roles and sitting at the board room table. continue

Holiday spirit shines through a new, innovative partnership between Extendicare and The Ottawa Hospital

Extendicare and The Ottawa Hospital are making the holiday season a special one for seniors and patients thanks to a new partnership at Extendicare West End Villa! continue

Our Remarkable Moments view all 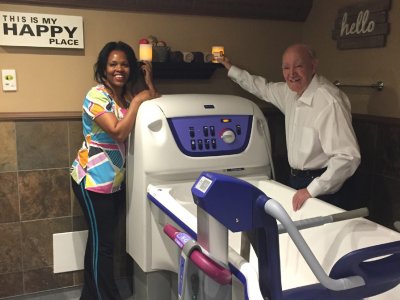 Resident HG said it was his first tub bath in many years as he prefers showers. continue 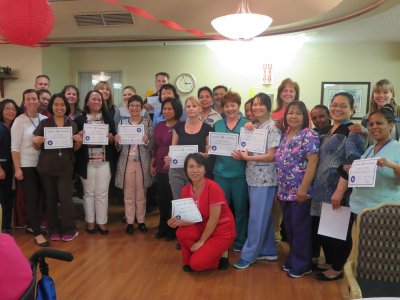